I have media ethics and copyright laws streaking through my brain today. Yes, they are flashing me as we speak. Plus I think my eyesight is fading (seriously) due to the fact that I spend way too much time in front of these UCT computers as well as my own. I couldn’t see the overhead projector properly yesterday from the back of the lecture hall and today I squinted at some poor man a few meters away in the Super Sandwich line, testing whether or not I could make out his facial features properly. I couldn’t. Plus if I ever see this dude again he’ll probably run away.

So F*ROCK was good. I had a lot to say sans photos because Inggs has suddenly decided to become one with nature, but I kept writing and writing and writing and I realized that I’d probably write an entire novel if I carried on. So this post is the shortened version. The first four bands were a blur. I blame it on the confusion created by orange/black/yellow armbands, however I made sure I was ready for Taxi Violence. Frankly, I still can’t get over how ongefokkinlooflik Taxi Violence were. And then I realized that I’ve never mentioned them on this blog. Huh? What a sacrilege. It was funny standing in the media pit (where I bumped into Walker WOO!) in-between the crowd and the stage watching George bound around in circles. He’s got the potential to make you quite queasy if you’ve just eaten. George is very big on crowd interaction too and the fact that the media pit was about 2 meters in width, George’s frustration at not being able to thrust his microphone into the crowd was pretty evident. Verdict – a flawless set. Those lyrics get me every time. And then the organizers go put Crash Car Burn after them. I mean, who are you kidding throwing those big dodgy white balloons into the crowd and that cover song medley mishmash? Waste of my attention.

And then it waaaaaaaaaaaaaas… Oh the Dirty Skirts. Yeah they were good. Actually they were very good. Lou thought they were spectacular though and dragged me from my cushy seat at the bar down the steps and halfway across Ratanga so we could stand at the front and shout, “We love you Jeremyyyyyyyyyy!!!” I lasted about 3 minutes before Jack brought me right back. I prefer The Dirty Skirts of old, when Jeremy used to draw stuff all over his face like a 2-year-old, like Kahn from Parlotones still does. You expected those crowd pleasers like “Feeling the Pressure” and “Daddy Don’t Disco” (which my father loves, har har). Oh and “Can’t Remember Your Name” that unbelievably cheesy commercial sellout song that I adore (the music video is very classy) and they ended with, to my delight “Homewrecker” which is quintessentially Dirty Skirts, well for me anyway. All I can picture is that dude from their music video in the superhero costume doing the moonwalk. Legend.

So after The Dirty Skirts, I was under the false impression that aKING were up next. I was so wrong. And due to some VERY unforeseen circumstances, like people without black armbands, I was left bumming cigarettes off people watching my favorite band The Parlotones (this is a lie) with a person who an hour or so prior I acted as though never existed. Funny how the world works. And you know what? It was strange, but I kind of enjoyed myself. Well I did until Kahn sang “Beautiful” and then it killed the mood. The words to that song make me want to gag.

Then The Parlotones end and people start to leave and I want to scream, “Where the hell are you going??? AAAAAAAAAAA!!!” It’s no secret how much I adore aKING and I’ve now realized I could probably name their set list right now in order. Sad, but true. And thanks to the goddam Parlotones, they had to cut their set short because all the bands were supposed to be done by 12 and it was 12:38. Heartbroken I tell you. Oh and their new video for “In the Twilight” is done. Check it here. This video is wack. I have all sorts of idea as to what is really going on, all of which I think are probably wrong. If you downloaded the free version of this single, you’ll be able to tell that it’s been re-edited and is slightly more up tempo than that one. I prefer the old one. 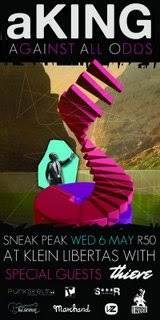 I’m so stoked for this gig. Unfortunately their CD isn’t ready, so I’m assuming they’re going to play a couple of teaser tracks for us?? Here’s hoping. The rest of my long weekend was – well lets just say it was productive. 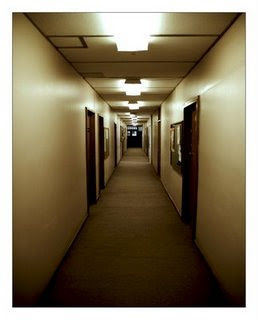 Inggs’ photo of the maze in Arts Block kinda reminds me a little bit of how I’ve been on a slight emotional road to nowhere lately. So deep for a Wednesday, I know.

Love is gonna kill you’ll before you die

Love is gonna clean up so you can make a mess

Love is gonna put you under house arrest

Oh and I’ve been struggling to come up with an alias for someone. First names just don’t do certain people justice. If you’re reading this then I think you know exactly who you are. Any suggestions?

And next month I’ll officially be a paid and published writer. Good times.