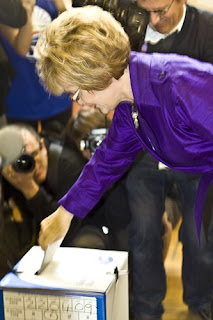 So as the results begin to trickle in you can kinda guess where they’re headed with the ANC taking an early lead in the national polls.

The news said this morning that the DA has an early lead in the Western Cape with 51%. This is awesome. After my voting debacle yesterday I honestly thought that this would not be a probability so early on. The IEC had four years to get their act together. FOUR years. We can’t even run a smooth election over a period of 24 hours. How the hell are we going to run a World Cup soccer event over the course of a month?? This is another subject entirely, one which I don’t feel like getting into right now.

So after Tuesday night’s exerts (why I surround myself with incredibly daft people sometimes is beyond me), I slept most of Wednesday and woke up mid-afternoon to make a mission to cast my vote. The closest station was Jan Van Riebeek High School, at the bottom of the road where I live, but when my mother and I got there the queue was so long that we decided to try Jan Van Riebeek Primary further down Kloof Street. Now I could see my mother’s ulterior motive here, but I decided to let her have her way and after finding an even longer queue at the Primary school she turned to me with those big pretty eyes of hers and innocently asked, “Should we go for a late lunch instead?” AKA “Should we go across the road to Ocean Basket and order a bottle of wine.” Skilled manipulator that one. But who am I to refuse her?

Before we knew it though, four hours had lapsed and it was 7:00pm. So paying swiftly we rushed back to the Primary school to get a spot in the line which we thought would have been substantially altered by now. It was. But the people in the line were amazingly irate. Thank god my mother and I had a considerable amount of wine in us to keep up our spirits, as well as half the line’s. Proceed to the foyer, where the line is moving quite quickly, only to be greeted by the worst possible IEC volunteer in the history of mankind, who announces that if you are not registered here, you need to fill out some kind of form. Sounds reasonable enough. But wait – they have FOUR forms left. “So if you are not registered here, could you please make your way down to the CIVIV CENTRE (yeah right) to get yourself a form and then come back.”

Don’t talk crap to me stupid woman. The IEC should have made sure there were more than enough of these forms. Any doos can see that when you’re halfway through a pile, you run to get more. Obviously I didn’t say this to her. I spoke very slowly and clearly in my best English/private school educated accent and all I got was a finger pointed in the direction of the door. I had to restrain myself from pulling her weave out, but other people were not as nice as I am. Some man started shouting that it was his constitutional right to vote and that the IEC were denying him this right because of their incompetence (I love people who use seemingly big words) and it was at this point that I grabbed my mother so we could get the hell out of there. I wanted to avoid the headline: Mother and daughter get caught in crossfire between angry voters. 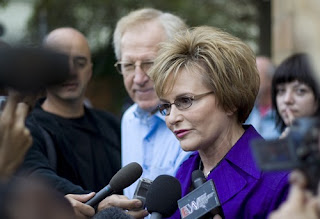 So because my mother and I were registered at Jan Van Riebeek HIGH School, we go back to where we started off earlier in the day and we’re greeted by a lovely ANC supporter. Now I have a slight confession to make: I really want an ANC t-shirt. Purely because I’d love to deface it but that too, is another story. So I asked this lovely ANC supporter wearing a gorgeous canary yellow t-shirt with whats-his-name’s face on it, where my t-shirt was. To which he replied:

Eish no sweetie, we gave them all out earlier.

Bullshit. I was there earlier. Not only did I not see you, but all your comrades had were flags. I don’t want a flag. I want a goddam t-shirt!!! So I ended up telling him that he better tells his party to get their act together in the next elections. He was very sweet and I did want to pick his brain a little more, but there was something I needed to do oh yes – vote!

Then my mother makes friends with some incredibly lovely gay Afrikaans man who tells her that the IEC official down the road was talking CRAP about those forms and that this queue was so long, we were going to have to wait 45 minutes. Fanfuckingtastic. But who cares when you have 2 bottles of chardonnay following through your veins? Now my mother can make friends wherever she goes, unlike me she does not strike up a conversation with a person for general amusement, she does it out of genuine interest. So after about 5 minutes of standing in the queue she’s surrounded by five men (my father would love this) talking about the state of the country/Zimbabwe/their families etc etc. I couldn’t really give a fuck and make a couple of phone calls to people and engage in some chit chat. Then my father calls and tells me he’s got the house to himself a Jack in his hand (see where I get it from) and he’s been watching football, sorry – soccer – since he got home. Great. Goddam Venezuelan-born Italian who doesn’t have to stand in hour-long queues because he can’t vote. I do love him though.

But back to the line. We finally get inside the corridor which leads to the hall and another IEC official comes out looking all important and stuff. By now I’m really starting to dislike these officials. Guess what? No ballot papers. Let me repeat that. No. Ballot. Papers. On ELECTION day. 10 minutes to get more. 10 minutes my ass, more like 30 minutes and by this time it’s 8:25ish and there’s an entire queue of people behind us. It’s at this point I hear. “Eish excuse me,” and I turn around to see that lovely ANC dude pushing past with a stack of chairs. So obviously I can’t resist and I ask him again where my t-shirt is. This time he was ready for me replying:

Sister, there will be more. We will have plenty at the celebratory parties.

Yes. Jacob Zuma will be there and they will be throwing t-shirts from the bus.

I wish this was a joke. I wish this man was being sarcastic, maybe then I could’ve had a little fun with him. But he was being dead serious. He even told me we should stay in touch (my mother almost had a heart attack) so that he could make sure I got a t-shirt. I didn’t take down any contact details.

The actual voting process was quite smooth. And after it was done my mother and I hightailed home, not looking back. Moral to this story? Trying to get your hand on a free t-shirt in this country is a mission. It would’ve been quicker to go to the factory where they were made in China and get one. 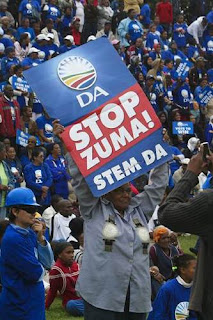 I think it’s pretty obvious who I voted for.