Woke up this morning and thought my lungs were being crushed. My doctor says that this is apparently what happens to people who smoke a shitload and then get flu. Basically, my tar filled lungs have been shaken up by this virus (which I’m starting to hypochondriac about and muse that it might be of the swine variety) and two craters of mucus have been shaken from both lungs. Charming. Plus my ears are blocked. On the up side though, I sound really sexy when I talk though my nose.

So I was going to take my camera to Beach’s birthday soirée last night, but instead, I left it behind. Stooopid move. I did drag Levin with me though, and she ended up being quite the hit with the Jews, to my delight. But by the time I got to Neighbourhood (ah yes, I have yuppie friends too) Beach was pissed out of her tree, a very large plate of chili poppers nachos had been desecrated and there were a few nonchalant-looking people sitting around a half-full bottle of Cuervo. Hmmmmm. So after reminiscing about the last 11 years of friendship over the remainder of that Cuervo, I was feeling good enough to indulge in multiple chocolate patron shots. MULTIPLE.

The entertainment for the night was provided by Malboro light man, whose cigarettes I all but finished; Messy man, who somehow managed to splash patron all over his salmon-pink golf shirt; and of course Beach’s boyfriend who from now on will be known as Wigga. You had it coming when you proclaimed yourself “The Notorious R.O.B.” Don’t you wish you could take that back now? Hopefully they all got home safe. I mean… I’m sure they all got home safe. I think Wigga was the only sober one.

And then naturally, I went to Mercury and I wanted to cry because I finally realised that those good old days are finally finished. Levin and I met at Mercury on a Monday. On the stage actually. While we were both dancing our asses off and as I looked at Levin slumped against a speaker last night, I knew she felt the same way. We cannot look into the crowd and name every second person we see or turn away in discomfiture (ah yes, this is a real word) because 5 of our one-night-stands are dancing in various spots around us. Why is this? Well I think we’re growing up. And I think it’s time to hand over the crown of depravity to the next generation of matriculates. I mean, we don’t have to, but I’d be too scared to take anyone home now, just encase I get slapped with a law suit or something. 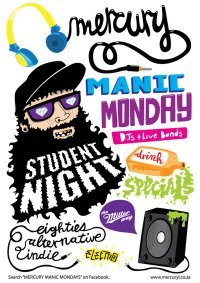 Time for the next wave to take over. Fingers crossed they’re not freaks.

So indulge me quickly while I pay homage to the Mondays of old. The Mondays where:

R.I.P Manic Mondays. I will forever remember you, just the way you were. Tonight I have that fancy dinner with Luke. Sometimes I like playing dress-up.

Side note: SA Tunes… please pay me for my two contributions to your magazine. I even bought a copy. It’s a hot magazine, but it would be even hotter if I’d bought it with R29.95 out of the R2000.00 that you owe me. Thank you.