Ah isn’t it a pretty day in the best Town of the Cape? Indeed. Too bad I have what is equivalent to the Ebola virus.

So ten points, a gold star and a chocolate chip cookie if you can answer this question: Who is my favourite local band? No, I’m not trying to match-make myself with other music lovers out there I swear, I am going somewhere with this. If you guessed aKING you are unfortunately mistaken. Guess again? Ah, but it’s harder this time around, isn’t it? Let me put you out your misery. It is in fact, good old Taxi Violence.

The boys have been a little quiet of late and as I mentioned in a previous post (excuse the dodgy font size I was having a bad day), are busy recording tracks for their upcoming album, which I’m assuming should be completed by now. And then on Saturday they will finally re-release their album “Untie Yourself” which spawned the hit single of the same name. With the Asian Persuasion now fully integrated into the band and this re-launch poised to hurl them into one of their busiest years yet, I couldn’t be more ecstatic. This band has the most remarkable work ethic, one which will take them far beyond the borders of this country. Oh yesss. It will. 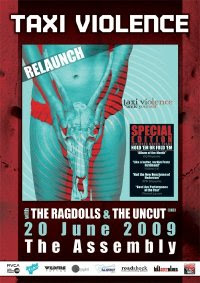 Basically, there’s nothing else you should be doing on Saturday night besides getting your ass down to Assembly.

Supporting Taxi Violence are The Uncut and The Ragdolls, who supported The Uncut recently on their tour to Joburg. I don’t know anything about The Uncut, so anything I’d write here would basically be a lie. And I don’t know who let Pope and the boys into Assembly, but they’re totally going to regret it when their groupies start flashing and licking people and when the Jagermeister goes “missing”. Ah relax, I jest.

Spare a thought for me while I party it up on the plane during my 13 hour flight.