I somehow managed to tear myself away from BBC and Sky News for a few minutes to write this post. Last night when Claudia and I returned home from what has now become a “routine” nightcap, her gorgeous Egyptian-born friend Eva phoned her in a panic to announce that Michael Jackson had died at the age of 50. Seriously? No frikkin way. And this came just an hour or two after my mother smsed me to tell me Farrah Fawcett (the orginal Charlie’s Angels sex kitten) died too. It’s gotta be an April Fools joke or something. Right??? Wrong. So, so, so wrong. Usually news like this really throws me, but Claudia was sufficiently distraught for the both of us so I just sat like a veggie in front of the TV trying to take it all in. I guess now I’m just in a state of shock really.

I then fell asleep and then awoke to a montage of his life and naturally, his greatest work, of which there is just too much for me to go into detail here and now. You can’t escape news like this wherever you are and I suggest (if you are not already in possession of one or two MJ CDs) that you run along and buy yourself a copy of every single one of his albums and concert DVDs, before they triple in price. HMV (UK’s equivalent of Musica) are already clearing spaces in their windows for a special MJ display.

This shit is wack. And sad. And tonight, after I go watch Goldfish perform on some “Common” I will make my way to Soho, find a seedy little club that I can smoke illegally in and boogie late into the night to those dirty disco beats. I might even indulge in a moonwalk or two, as a tribute to one of the greatest – if not THE greatest – artists that ever lived. Don’t worry Pope, it’ll be okay.

So pull up your white socks and made obscene gestures at your crotch as you remember the King of Pop. Moment of silence, asseblief. 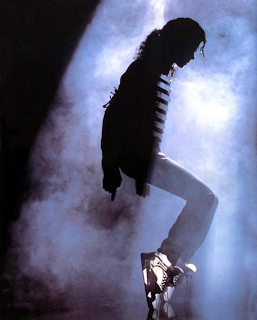 The way he should be remembered.

Let us pay tribute to the first black icon of the MTV generation.