>So in-between coffee (because today is all about the java, as far as I’m concerned) and a couple of ciggies, I’ve actually been quite productive today. Who would’ve thought, right? And then on my way to get my media course reader I got handed a very interesting flyer by a buddy of mine – who just so happens to be a musician, but then again, isn’t every second person in Cape Town a musician? Moving along…

The shit hot flyer was for the debut gig of Pienaar du Plesis’ new band, The Pinkertons (I could only imagine how my nonna would pronouce that shit) who are playing at The Waiting Room Monday 10th of August. And they are featuring Gerald Clark. High five for getting that right boys – and girl. Yes intelligent folk, the lead singer is a pretty girl who goes by the name of Gabi-Lee Smit and has quite an extensive resume. Perhaps you’ve seen her on the cover of SL? Or maybe she’s served you a burger at Royale? How very Inge Beckman of her. And they (Pienaar, Gabi-lee and Antonie Gunther) describe thier tunes as “blues infused groovy tunes with the occasional modern beat”. Hmmmm.

I cannot give you any more information because that is, simply all I know. Keep your eyes peeled for a Facebook event thingy. I look forward to it.

Become a fan/join the group here. 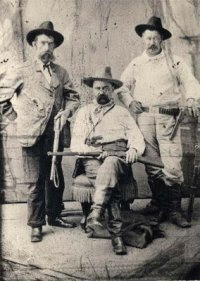 This is what they’re supposed to look like according to thier profile pic. I’m not buying it for a second.


And F.Y.I (because I’m nice like that) in case you are confused, The Pinker TONES are an alternative pop group who hail from Barcelona, you know, in Spain. Lets hope we don’t have another Love Jones situation on our hands because Stealing Pinkertones sounds like you got your hand caught in the proverbial cookie jar.