Italians don’t pay attention to alarm clocks. “Wadda hell is dis?” I hear my nonna (English translation: grandmother) is her heavy accent screaming at me in my dazed and confused state before she kicks me out the door for my 8am Postmodernism lecture. Nope, this didn’t really happen, I dreamt it. But back to my first sentence – it is true. The REAL alarm clock in an Italian household is the espresso coffee pot.

Once it has boiled and the freshly brewed aroma of whatever hell coffee bean was ground the week before, wafts through the house like a deadly plague, everyone clambers to get a cup – and also to avoid being the sucker who gets half a cup and therefore has to brew more. This sucker is usually me. But not this week, hence the reason I woke up at 6:30am. Good times.

In other news, I’ve never been so excited about it being Tuesday. Mainly because it’s one step close to Wednesday, which ultimately means that Vanfokkingtasties is almost upon us. Plus then I have two free days off after that because seminars only really commence next week. You gotta love those people who work in the timetable department at UCT. If you haven’t got your tickets I suggest you do so now. HERE.

Otherwise, I’m off to get my second cup.

Hopefully I’ll have something interesting to say a little later, because honestly, despite the coffee, it’s way too early to try and act intelligent. 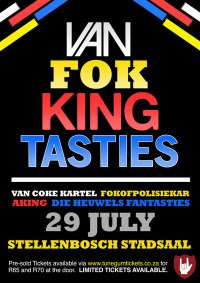