>What a mission to try and get any computer in this place to work today. Eish. Plus I cheated on the Ukranians the other day with Buckhalter’s computer and I think they can smell the broadband on me.

So as my affair with this glorious city inevitably winds down, I’m starting to get slightly emo, which is weird because it’s an emotion I haven’t delt with the entire time I’ve been here. And then that got me thinking, I haven’t been angry, sad or pissed off (which is not the same thing as angry let me assure you) with anyone. I haven’t slapped anyone, told anyone off or been too much of a bitch to people who didn’t see it coming. I’ve been… well… pleasant. I even ignored some stupid motherfucking green grocer at Borough Market when he chirped “I don’t know how they do things where you’re from, but that’s not how we do them here.” All because I was touching his garlic (god that sounds bad) which is what you do at a goddam market if you want to buy shit. Hmmm. So much to say, so little time. He looked like a Manchester United supporter anyway so I gave his retardation a wide birth.

I’ve done, seen, heard, expressed and drunk too much to put it all down into words. I think in the months to come, and once my legendary photos are uploaded, I might let a few things slip, or perhaps share another anecdote or several. Beach, Inggs and Pope are probably the only people who really know how to get me to spill my guts though. It starts with a J and ends with a K. Doesn’t take a rocket scientist this one.

So excuse me while I list the things I’m going to miss. Top of my list would have to be late night Big Brother reruns and my daily walks across the Jubilee Bridge. I’m going to miss Claudia’s manic friends who buy me chocolates from Harrods and make the cutest babies who look like Stewey from Family Guy aka fat sausage. I’m going to miss the TMF channel and their dodgy Top 40s. I’m going to miss saying “top up” and “fags” instead of airtime and ciggies. I’m going to miss perving over the hot t-shirt man in Camden and I think more than anything I’m going to miss getting lost on the tube and taking the Northbound instead of the Southbound train.
Thank you Buckhalter for fishing me out of the bushes in a druken stooper soaked by the rain and drain water and covered in leaves. If I every play bar billiads with you again, I’ll probably kick your ass.

I am now off to take my last batch of photos and say my goodbyes. Adieu London. The evil cousin is leaving the building. 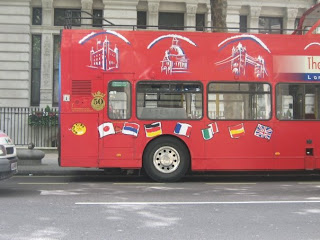