Oh yes it’s very good to be back. Indeed it is. So good infact, that I have ignored posting duties for the last week. But now I seem to be back in the full swing of things, which means that normal posting will resume and hopefully so will normal following. Yes, I’m not a doos, I realise that some of you don’t really give a shit what road I got lost on in Covent Garden and how I foamed at the mouth when I saw Jude Law on the West End…

I really had a four day weekend, which started with some LMG catch-up with Mikey, who presented me with the last issue that I got to scan in slightly more detail over the next few days. Mikey seems to have taken some very talented writers under his wing and it’s because of this that I am extremely excited to see the next issue (out sometime next week at your nearest bar/restaurant/club). Make sure to check-out the “Music Insiders” column on the back page. Mikey has published a person or “phantom” as I like to refer to him/her who is doing an anon-Lord-Voldemort type thing by having very controversial opinions and then wanting to remain hush-hush. For safety perhaps? Hey, that’s fine by me, it just makes the guessing game for the rest of us more fun. 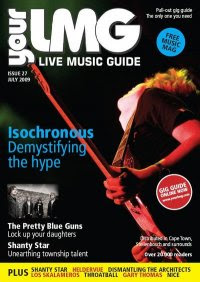 3rd World Spectator officially kicked off my weekend though, and have the honour of being the first band I’ve seen since I’ve been back. Wow, I just realised how egotistical that sounds. I’m sure they guys feel greatly honoured. Moving along… I honestly do love these guys, and I was very confused to hear after a brief conversation with lead singer Peter that there have been whisperings about these guys being a “Muse tribute band”. Now if you read my previous review of their gig with Ashtray at Zula, I did mention Matthew Bellamy and Peter Crawford in the same sentence once, but this was meant as a compliment of the highest degree. If there is anyone out there rolling their eyes at this band because Peter’s vocal chops are slightly too good – then they are dumb. Plain. Simple. E-mail me if you have an opinion. I might delete it. I might not. Let’s keep rolling.

The Sleepers were next up on Friday night and I was gobsmacked to realise that there are quite a few people who have never seen them perform live before. Hmmm. I still haven’t been able to get my hands on a copy of their CD, mainly because of the min cash flow, but I can only assume that it would be worth every penny. Leaning heavily on the alternative and experimental genre side of things, I know that the whole Serj Tankian/hard rock thing is not everyone’s cup of tea, but these guys are so musically tight and have been working so consistently hard for so long, that they deserve a large degree of recognition. And it is so disgustingly worth it to check them out live, if for nothing else other than the violin bows the three guys in the string section whip out every now and again – oh and of course for the very cute drummer. Haha haa aaaaaaa. You can pay me later Steve.

This next band confuses the heck outta me. Jon Monsoon wrote a nice little article in this month’s LMG (that’s that quality journalism I was talking about) all about them. So for a very long time I was pronouncing their name I-sock-crow-nesssss, however it just so happens that the name of this band is pronounced I-so-chro-nous. Or is it the other way around??? Oh crap. Honestly I am kak confused. I’m just waiting for some little know it all out there to put me straight. The keyboardist makes this band for me. I’ve heard tonnes of great compliments being thrown their way like “Early Pink Floyd” and “They’re the only band whose t-shirt and CD I would buy on the same night” and my favourite, “Are you sure they don’t come from Cape Town???” Rachamaninov must be so proud.

Highlight: Seeing the Kings of Vegas boys. They crack me up.

Then on Saturday, after sleeping most of the day, I mosied on over to Assembly for Cape Rocks. The flyer told me that it was a Cape Town Rock Fest. Really? Thank you for educating the masses. Rock Out Radio did a little live broadcast from the gig too with DJ String (yes, DJ String) playing some dodgy tunes in-between that I suppose was meant to get people dancing. Oh don’t get me wrong, I danced. It was just at the bar with a Jack in my hand. 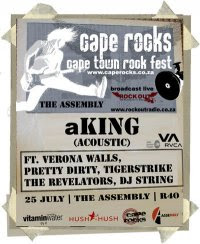 I missed Tigerstrike (oops) but caught Verona Walls, Pretty Dirty and The Revelators. Oh and then a little band called aKING did a little acoustic set. I think I’ve spoken about them before. Maybe here. Oh and here. And then here. Oh yesssss. I am a fan. I am doing a review on the night so I guess I can’t go into that much detail… or can I? The gig was also sponsored by that Vitamin Water stuff and by Hush Hush who have thrown some hectically awesome parties. Look out for this name at the bottom of most flyers in months to come.

There was a point I thought the lead singer of Verona Walls with going to hang himself with his microphone chord, tossing it over one of the beams and then wrapping it slightly around his neck and belting out his closing tune. Then after saying goodnight, he left it hanging there, looking like some kind of weird scene from The Wrestler. Interesting. Manim got all hot under the collar because the drummer took his shirt off. It was a very impressive torso indeed. And talking about impressive torsos, The Revelators seem to have attracted a nice little female following with theirs. Local 3 piece bands don’t usually have a hope in hell when it comes to holding my attention, but these boys did it rather nicely, with some schweet power chords and guitar work. Pity I couldn’t make out what the hell lead singer Johnny Tex was on about.

Pretty Dirty. Dirty. Dirty. Dirty. I kept hearing that word during the set. I’m reserving my judgement on this foursome until I see them again. And then there was aKING – well, half of them anyway, with the other two up in Joburg I presume. Oh no but wait, standing in for Jaco and Hunter were Laudo’s cymbal/tambourine effort and a very impressive snor. I think he wants to be “die man”. I’m saving comments for Vanfokkingtasties. I ended off the night very nicely with some Shack time and some crazy leg guitar and Jagies with Pope, Manim, Mikey and a few others.

I then proceeded to indulge in a lovely Sunday with the family, soaking up the most gorgeous weather I predict we’re going to be having for quite some time. Watch there be a heat wave tomorrow. Go figure.

And finally, It’s nice to have Inggs back. She took a trip on a pirate ship for a bit and left her marbles god knows where, but she’s back – religious iconography and all. Plus this means I will now have proper visual aids to my reviews. Whew. Walker and I just never seemed to be in the same place in the same time. I still love you though buddy.

Happy Monday kids. I can’t get Dirty Diana out my frikkin’ head.