It’s Friday. I had the usual 8am tut this morning but my hangover wouldn’t allow me to make it. Thank you Jack. Also, a lot of shite went down this week to make it a not-so-pleasant one for me. And I haven’t worked a day this week, which means I’m broke. Great. On the up side though, last night was quite interesting with Mr Cat and the Jackal, although I’m beginning to detest Zula more and more every time I step foot in there. The door man is hot. That’s about it.

So today I decided to stay at home, because lord knows I don’t need another one of THOSE days. So curled up on my couch with a nice big cup of coffee, I watched a couple hours of MK and then – BAM. ‘Klein Tambotieboom’ came on. Okay so before some of you scream “She’s on crack, that video came out ages ago!!” let me assure you that I am indeed not on crack and that I do know that this video is, for a want of a better word, old. It’s just that when it premiered, I was in London and I didn’t get the chance to give it the once over.

Besides their music, Die Heuwels Fantasties seem to have perfected the “On the Road” style music video. It’s hot. My personal favourite Heuwels video would have to be ‘Vinger Alleen’ purely because that stretch of road on which it’s shot is like the graveyard of my youth (goddam I’m so poetic sometimes) and I can identify with the car breaking down/suiping out the bottle/and the bonfire effort at the end. Graveyard. Youth. 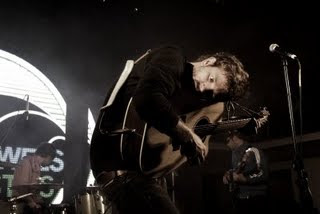 Anyway. Naturally I rank their music videos in conjunction with my preference (because I really have no life) and coming in a close second would have to be ‘Sonrotse’. Not anymore. Along comes good old ‘Klein Tamboetieboom’, which knocks Mozambiqucan-shot ‘Sonrotse’ on its sandy ass. It’s gorgeous. It takes a pro to make a video interesting and to hold a viewer’s attention where you’re sitting in a car for half a song. It’s also nice to see Hunter singing in a video for a change.

Now those of you who are interested in Die Heuwels and have been following this blog for some time will remember what I said about ‘Klein Tamboetieboom’ here when I briefly reviewed their CD a few months ago. I wasn’t wrong – because how can an opinion in essence be right or wrong – but I will admit that the song has grown on me and has probably become one of my preferred ones on the album. It’s those lyrics. They’re frikkin gorgeous. Watch the video here. It’s the only Heuwels music video that isn’t on YouTube. Even that goddam video for the Braai Day Song (oh yes kids, they’ve made a video) is on YouTube.

And some other stuff I couldn’t give a shit about. Look out for some major cosmetic surgery happening on this blog very soon. Yay. 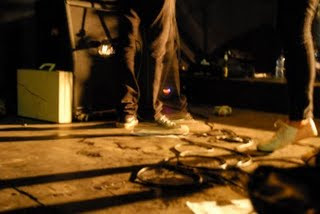 This is what happens when you go to a Heuwels practice session. You “kruip oor die vloere” taking photos.