Excuses are the tools of the incompetent, right? Sometimes. But all those other times there really are circumstances which are just beyond our control. Take Heldervue (ex Vontaines) for example. The Somerset West threesome was beyond stoked to play their first gig/album launch at Mercury on Saturday night, but the fates seemed to have other plans.
Firstly, baring in mind that more than half of this goddam village was at Earthdance (no comment) and a large portion of those left behind went to Assembly for the second Cape Rocks, Black Market Riots, The Lottery Tickets and Heldervue pulled through a crowd consisting mainly of drinking buddies, acquaintances and girlfriends. In retrospect though, those are always the best kinds of crowds when you’re still up-and-coming. But the place could have easily been fuller. MUCH fuller.
Secondly, when some douche drives into the side of your car a couple of hours before a gig, and you have to “stand in the rain dealing with the police” as Phil (Heldervue bassist) explained to me a little later on, it doesn’t really ease the pre-performance nerves. Personally, I would’ve bought myself a bottle of Jack, but then again my priorities are evidently different.  And thirdly, experiencing technical difficulties during the third/forth bar of your first song is simply just kak.
But let’s rewind just a little. I had some drama of my own to sort out earlier that day and missed Black Market Riots, but caught the tale end of The Lottery Tickets. Their repetitive, one dimensional lyrics really did nothing for me and as far as band interaction goes, from an audience perspective, it seemed as though each musician was totally immersed in his own space. I attend gigs to be entertained, hence my obsession with Fokof’s Wynand (who I couldn’t take my eyes off on Wednesday at Klein Libertas. Jirre jisssus) Perhaps I should see an entire set before I comment any further on The Lottery Tickets? Perhaps.
Cue refreshments supplied by Jack, followed by Heldervue’s first song where Phil’s bass amp had an epileptic fit (not really his night I’d say) and they stopped playing to sort out whatever the hell was going on. Play resumed with ‘Order of the Opposites’  and was followed by ‘Done Day’ at which point Mikey and I both looked at each other and agreed that good ol’Jacobson might have some serious competition in Heldervue’s drummer Fourie Pretorius. The dude has some serious talent. On the vocalist front, it’s pretty obvious that front-man Julian Bach has sufficient vocal chops to lead this band, but during their live rendition of ‘Communal Accordance’ the up-tempo title track off the album, Julian’s vocals seemed way too stretched on the chorus and I was wondering where the backing vocals were. Phil?? A little birdie told me he could sing too. Hmmm. Moving along… 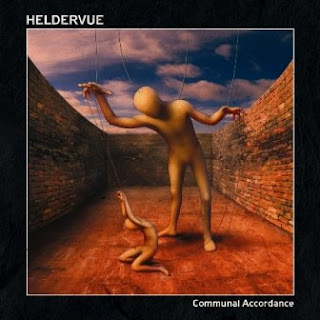 This cover just screams Surrealism and emoness.
The chemistry between these guys is super and unlike, let’s say aKING (where when Laudo does ‘Shine Your Light’ and the other guys leave the stage) during ‘Beggar & Priest’, which Julian performed solo on his electric (not acoustic like on the album) guitar the remaining boys formed a nice little hippie circle on the floor and chilled for two-and-a-half minutes. Julian also added to the casual vibe by attempting a bit of “private joke” banter in-between songs.
By the time Inggs joined me, which was four songs from the end, she was glancing over at the stage every now and again with a funny look on her face which basically meant “Why the fuck are we here and not at Assembly watching Fokof??” I don’t think the overindulgent TEN MINUTE long tune ‘Clean Machine’ helped my case and I almost pissed myself laughing when she started clapping about five minutes before the song was due to end. After that it only took the last few songs for her to see what I saw and by the end of Heldervue’s closing tune ‘Any Better’, we were on the same page. Mikey and I were quite pleased with ourselves to think that we noticed this band now and not after everyone jumps on the Heldervue minibus because trust me, it’s going to happen. These guys are good. They have a good presence and the musicality to back it up. And even though fate tried to pull a fast one on them, they pulled one right back. Props.
And if you’re wondering how the hell I know this CD so well, I reviewed it for the new LMG, which should be out sometime at the end of this week.
Highlight: Me. Yes, me. Why? Because I’m a narcissistic bastard like that. And also because I started watching in the back. Towards the middle I had inched closer. And by the time Inggs had joined me and Heldervue were blasting their last song I was right in front.
Hos jaaa.
See you all at Aandklas on the 13th of October. And become a goddam Heldervue fan here. 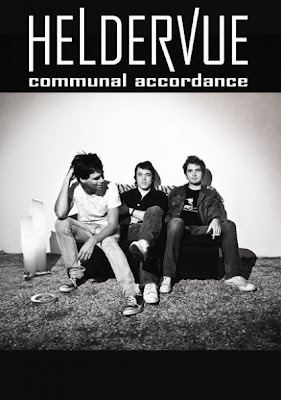