Mondays are usually the days when I study the most, or get the most work done in general. I’m not too sure what’s going on today, but apart from Facebook being on crack, I seem to be in a bit of a lull too. So today sees New Holland’s sophomore album become available online from Rhythm Records. Their new single, ‘Something To Believe In’ has been doing very well on the High 5@5 (as a lot of local bands seem to be doing lately) and it looks as though they’re all set for their album launch at the House of – wait for it – Rasputin. 10 out of 10 for originality I’d say.

Now I’m going to be very honest here (you wouldn’t expect anything else from me, would you?) and say that New Holland’s debut album was quite a landmark in terms of Cape Town/Stellenbosch pure pop-tart kitschy-cool goodness. They cut a very fashionable, edgy figure and rode the wave of that catchy chorus in ‘Shine’ and the success of their debut album ‘01’ which made them those “ones” to watch. But this is done. And dusted. And today sees the release of their new album, ‘Exploded Views’.

Their manager is convinced I hate them. I think this is quite funny. My mother always told me that hate is a very strong word. It’s also I very boring word – “detest” and “abominate” roll off my tongue much nicer. Ah I jest. I honestly have no problem with this band and with their style of music. Plus, I would never write an album off without listening to it first. Unless of course it’s another Chris Cornell venture with Timbaland.

If you have money, download it here. Or if you’re just curious, checkout the track listing here too. ‘Collection of Relatively True Statements’ doesn’t sound like the title of a cheesy poof pop song. Or does it? 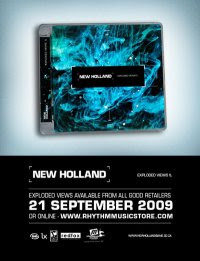 The cover of this CD looks like a horrendous acid trip/outer space experience.