I’ve been in a really weird space lately. Not too sure exactly what’s going on inside this here brain of mine, but I just have no lus to do anything lately, besides read. And since “attending gigs” is what I do (this makes me sound like a little bit of a douche, but oh well) this has not been very constructive for me, or my writing. Postexam blues? Perhaps.
Now usually there’s only one Tennessee-brewed man who can pull me out of these slumps and make me realise that life is indeed a glorious one, but (and some of you might not believe this) he’s recently been replaced. Oh yes he has. I’ve replaced Jack with Jeff. Jeff Buckley. Who actually drowned in the Wolf River that runs through Tennesse, so I guess it all comes full circle in some sort of universally strange way.
And then I was presented with a postexam present, courtesy of Mikey. Jeff’s second, but first posthumous album ‘Sketches for my Sweetheart the Drunk’. Nice title. It was supposed to be called ‘My Sweetheart the Drunk’ but because it wasn’t completed his mother thought it would be appropriate to change the title slightly. Clever. I’ve had this album on heavy rotation since I was handed it. And I think it’s safe to say that the slump is officially over. Also, the production of this album was overseen by Chris Cornell (oh how the mighty have fallen) and apparently the two of them were very good buddies.
Apparently Jeff and Mr Cornell used to have competitions to see who could write the best songs. Wonder what Jeff would think of lyrics like “no that bitch ain’t apart of me”. Yes yes yes, I know I’ve harped on this Chris Cornell thing for long enough, so in light of this Buckley-Cornell revelation, this is the last time I will ever complain about him. Cross my heart. When Rolling Stone magazine released their “100 Greatest Singers of All Time”, this is what Mr Cornell had to say about his buddy, who was ranked at number 39. It’s moving stuff, but oh so true.
The man’s voice is about as close to a spiritual experience as you can get. And I’m fake Roman Catholic children, so I know what I’m talking about. 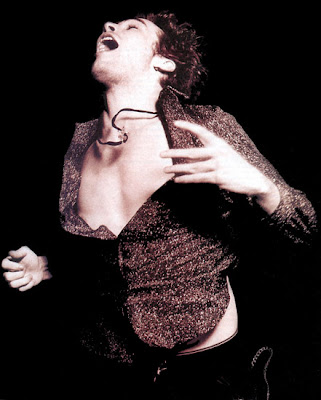 This is my favourite photo of the usually pensive Jeff.
Also, on Thursday I ventured out from my hole to mission to Mercury to watch The Ragdolls play downstairs. First gig in 5 months and it was pretty obvious that they were kind of nervous and rusty through the first couple of songs. But Pope settled nicely into the set and once she did that signature “lip curl” she was on a roll. I can’t fault Pope on her voice – its shit hot, but it turns out she’s also a demon on the bass. Mr Fantastic better watch his back.

Now if you’re reading this and you know me, you probably know that I’ve got a pretty thick skin and it’s not very easy to get underneath it. So let’s just say that my skin has been slightly irritated, kinda like what a mild rash will do to you. I do not see the reasoning behind feeling the need to attack someone’s intellectual status. “Stupid” is quite possibly the worst word you can call someone, anyone, especially if, like myself, they turn out to not be that much of an idiot. Also, if you’re going to be a preschooler and start throwing those kinds of adjectives around, at least have the balls to do it to my face.