Very strange weekend this one. One filled with late night confessions, an instrumental band, copius amounts of black coffee and one early morning trip to the police station to post bail. Needless to say it was tonnes of fun. I miss those simple days when I was a minor. Ah who am I kidding, even when I was a minor nothing was ever simple. High five to life.
Friday night Mikey and I missioned to Speedway Cafe to checkout We Set Sail. I honestly had no idea what to expect because I didn’t even bother to ask what they were all about. I went purely to support my buddies. Cause I’m nice like that. Nevertheless, We Set Sail’s instrumental mishmash was pleasantly surprising, sacrificing a bassist for an extra keyboardist and a vocalist for a female trumpeter. On their Facebook fan page it says that they do have a bassist (Patrick ex-Howard Roark) but he was M.I.A. Hmmm.
Now sometimes I’m in chill mode and other times I crave a little Taxi Violence head banging, but the type of choons that We Set Sail delivered were exactly what I needed after the manic day that I’d had. Relaxing, soothing stuff – nothing like any of that Buddha Bar/Cafe del Mar crap – accompanied with a little bit of performance attitude courtesy of Trynity (trumpeter). Hell I’m sure the other boys had it going on too, but unfortunately the way that Speedway is structured, if you get stuck behind the benches, goodluck to you. It was also jaw dropping to see Steve (drummer) do a 180 from what he regularly does with The Sleepers to something as laid back as this. People that talented make me sick. I also managed to catch a song or three of Chris Slabber’s on my way in, but I’m going to reserve my comments for the 17th of November at Luna. It’s going to be a cracker children.
Also (and I don’t why I’ve never blogged about these dudes before) hip hop foursome ETC Crew released their new music videos last week and had a nice little parrrdy at Rafikis for it. Now ETC Crew have been around for a while. They’ve been successfully over the seas and back and have been gigging steadily for the past few years, notching up festivals like Rocking the Daisies, Zimfest and Oppikoppi on their belt. Plus these boys just ooze charisma. Seriaaas. 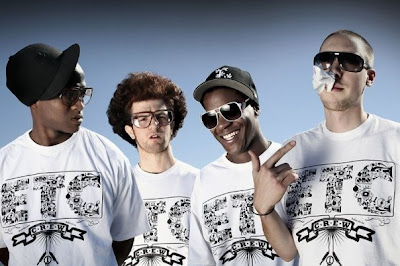 L-R Logical, Bonsai Bush, Johnny Filter and DJ White Nite.
Now Johnny Filter and Logical (aka Martin – but stage names are just so much more gangsta) and I go back a long way – like Lord of the Rings long way. We even shared a limo and a table at my Matric Dance. Needless to say our table was the shit, even though those stuck up bitches couldn’t deal when Martin wouldn’t hou his bek during the speeches. Ah there I go digressing… I guess my point is… a more awesome bunch of dudes you’re not going to find and this translates when they’re onstage, with the most entertaining and energetic performances of any hip hop group I’ve ever seen. And that’s the Jack’s honest truth.  Enjoy their music video. It might take a while to load, but that’s because it’s two videos for the price of mahala and it’s worth it. If for nothing else other than to see Martin walking around Brooklyn “where white people suffer from malnutrition” butt naked in the first music video. Hell I’m white and I wouldn’t even go to Brooklyn. And the second video is just pure genius. I dedicate it to everyone who has EVER ripped off someone from Joburg. I was in tears.
And on that note, I want to see ETC Crew perform with Jack Parow, that would be one cracker of a gig. Jissus. Catch ETC at Mercury on the 14th of November with Captain Stu. LADIES GET IN FREE THE WHOLE NIGHT. It’s an interesting pairing for a gig and it’s been a while since I’ve seen ETC Crew perform so I’m not missing this one for all the Gossip Girl reruns in the world. Hushhhhh mense. It’s a hot show.
Oh and ETC Crew have also been nominated for Best Group at this year’s Hype Awards. Go and vote vote vote (all along here) like it was the elections. And if you didn’t vote during the elections in April, you’re a doos. Simple.
0
SHARES
ShareTweet