And so my birthday weekend comes to an end.
On Friday night apparently I was “channelling Keith Moon” at my shindig at The Shack/Mercury . Now Keith Moon (drummer for The Who) used to take animal tranquilizers in pill form and wash them down with a hell of a lot of branna. And then he liked to beat people up. Now instead of beating people up, I did 180 and turned into the friendliest person alive. Yeah I know what you’re thinking, strange right? It was epic. Props to Inggs for driving my drunken ass home and to Smedy for being an absolute legend and not leaving my side, unless it was to go to the bar. The boy’s got style, even though not everyone might understand his unique brand of “tighter than a 10-year-old” jokes.
To all of those who came to wish me well but couldn’t find me because I was running around like a headless chicken, I love you all. And you know I’ll make it up to you, in one way or another.
Otherwise, I’m very keen to get this last exam over and done with so that I can slick my hair back, put my wayfarers on and mission over to Stellies with some quality “rooiwyn en sigarette” in the background. Inggs and I have kinda lost our way if you ask me. She’s taken to the branna route like Dean Moriarty took to women and I’ve – well, let’s just say I’ve been running around with a first aid kit trying to right (or perhaps, write) a few wrongs.
In other news, my new favourite favourite Owl City trumped some other dodgy artist to resume their well deserved place at the top of the Billboard Hot 100. Adam Young, I love you. Oh and my new pick for “Single of the Week” isn’t actually a single, but it’s a shit hot tune called ‘Fast Fuse’ by Kasabian off their latest album. Probably my favourite one off the album. It puts me in a good mood. That’s all I need that this week. 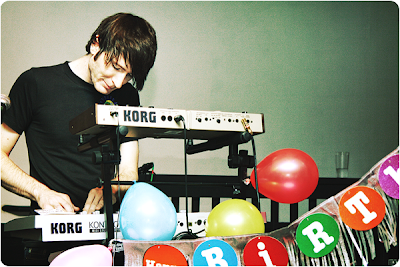 Adam Young from Owl City.
Tonight (if you’re venturing out) it’s Heldervue at Mercury and tomorrow night it’s Christiaan Slabber at Luna (aka The Shack). I have an exam the next day at 8 in the morning. If I can make it to the gig, so can all of you.
And once again, thank you to everyone who made my birthday extra special. You all rock the cashbah.
0
SHARES
ShareTweet