I know most of you children think I had the time of my life on Avontoer. And most of you are right on the money. But it wasn’t all puppies and ponies let me tell you. It’s tough being English (and half English at that) on an Afrikaans escapade when in actual fact you are not fully trilingual. Ek sweer ek probeer…
We interrupt this post for a special word from Inggs:
Following a music tour is rife with hazards, which for two working girls (media meisies) include in order: being called working girls (har har); being mistaken for groupies (I’m taking pictures for a magazine, you ass); not being taken seriously (we may be the only female media people here but girls don’t only work in the kitchen, bitches); oh and being treated as mentally retarded (Quote: “they’re outsiders, they don’t even understand Afrikaans. I hate outsiders who come here and think they can just hang out with the tour.” Ons kan alles verstaan en ons sit fokken langs aan jou, doos). You want to see your name in print?
I know I’m doing a little bit of patchwork journalism today, but she honestly summed it up much better than I ever could. Besides, I’m moerse hungover from 7th Son’s stellar gig last night. Miles, you’re a legend.
Second installement of the Avontoer escapades. Go go go.
MOSSELBAY
We arrive in Mosselbay. We need somewhere to change. So naturally, we do it in the Stones bathroom and after a “WHAT THE HELL??” from the bouncer who quite obviously noticed our sudden transformation, we jumped in the car and missioned to a restaurant parking lot. Why? To do our makeup in the car of course, away from prying eyes. We needed to avoid the “Rambo Panda” effect. What’s Rambo Panda you ask? It’s what happens to women who wear heavy black eyeliner/mascara and don’t wash it off properly. After a lekker jol, they wake up in the morning and ta-daaaa – Rambo Panda on your face. 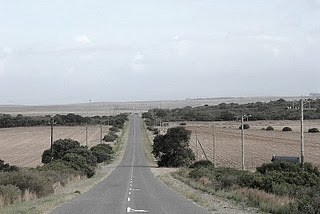 Cheers Stilbaai.
The Mosselbay Stadstal reminded me of a retarded Matric Dance venue. Mr Cat and the Jackal opened, Zinkplaat followed, City Bowl Mizers tore up the stage (where I was right in front championing the cause). And then Straatligkinders stepped onstage and I fell in love. With ‘Gewonde Standbeeld’. With ‘Avontuur van ‘n hartbreek’. With ‘Gedagte vir die dag’. With Bouwer’s gritty voice. With thier lyrics. With thier message. In.Love. Okay I’ll stop now. Highlight of the whole gig was definitely the appearance of the Avontoer MC, Dawee, playing lead guitar on the Straatligkinders version of ‘Kaptein’. He apparently learnt his bit a few hours before the gig on the bus. Jisssssus. Robertson my sweet, followed by a trip to the petrol station to get chow – where the police pitched up because apparently the MosselBay Bonjour workers can’t handle two bus loads of ravenous Seerowers et al. Hilarious. 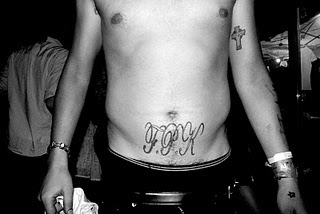 I’m thinking of getting C.B.M. on my forearm.  Sexay.
Campfire virgins, followed by more wyn and some “kumbuyaaaa” moments with an acoustic guitar or three. The last thing I remember was Fred from Thieve crooning “Hey Juuuude”. Good times. Hungover as fuck the next day. 45 degree heat. How do you rectify this? You go swimming in an e-coli  filled river in your underwear of course.
We love you Mosselbay.
0
SHARES
ShareTweet