Last Avontoer instalment children. I’m going to make this as brief as I possibly can because there’s way too much happening this week for me to still dwell on the Avon-of-a-toer. Fukkit. I missit.
HARTENBOS (Want ek hou vakansie in Hartenbos en jy hou vakansie in Quebec – Jack Parow)
An under 18 party means no booze and to channel Porra, “So exactly how’re we going to do this??” Well, if you’re clever (like naturally Inggs and I think we are) you go to the Spar, you buy a box of Robertsons sweet, sweet wine and then you go suip it on the beach. Oh yes. We did however make the FATAL mistake of buying a box of Kent cigarettes after having basically smoked anything and everything we could get our hands on. And then on top of Sadam’s ciggies we decide during the City Bowl Mizer’s gig that now would be a good time to channel Bouwer from Straatligkinders and sing all of the Mizers songs with a slight screamo edge to it. “CITY BOWL MIZERS ON THE INSIDE, ON THE INSIIIIIIIIIIIIIDE”. Kent+scremo+actingclinicallyinsane=voice loss/bronchitis. Learn from my mistakes people. Learn from my mistakes. 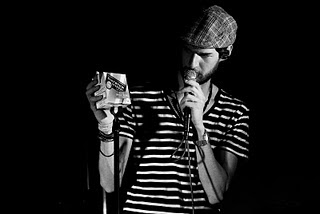 Dawee (Avontoer MC) holding mother’s milk aka Robertsons wyn.
Other than that, I actually enjoyed Hartenbos, despite it being a playground for paedophilia. Seriously. I’ve never seen so many kids in one dorp in my life. Hence the under 18 gig. And not very smart kids either. The one thought that Dean, one of those legendary Seerowers looked like Andre from Ashtray Electric. And he rolled with it. He may or may not have got her to buy him stuff.
Ryno Velvet was on fire. Crazed rock star that man is. He also did some kind of weird, possessed-like dance during his ‘Whole lotta love’ cover that the 12-year-olds were going crazy for. Hmmm. The Straatligkinders owned the night. The kids were literally climbing onto each other’s shoulders to get a glimpse of them. It turned into a full on MTV-style concert. Oh and ef-el weren’t half back either. The poppies love Fritz with that cute Barbie&Ken thing he’s got going on. I was an ef-el fan. Now I just have somewhat fond and distant memories of singing ‘Sindikaat’ on drunken escapades.
Life.Goes.On.
JEFFERYS BAY
I actually don’t know where to begin with this one. We drove approximately 25km on an empty tank of petrol and somehow managed to make it to J Bay. Who knows how. Combined, Inggs and I had slept about 5 hours in the last 2 days and personal hygiene was fast becoming a distant memory. And food? What the hell is that? On the road we feed off petrol. I suppose if either of us had voices at this point we would’ve exchanged some pretty shocking words.
We then find this backpackers that give us a place to sleep, a shower facility and booze (like we actually need any more) free of charge. Yes. I’ll say that again. FREE OF CHARGE. This was what went down…
Inggs/Me: Ohmygodwe’vejustdrivenforgodknowshowmanyhoursandweneedaplacetosleepitcanbethefloorwedont
mindorontheroofpreferrablyaflatsurafacebutwearenotfussy.
Leo: Etienne, these girls have just driven from Botswana or somewhere and need somewhere to dos for a few hours before some gig. We got room?
Etienne AKA the-most-awesome-dude-I’ve-ever-met: No. But I’m sure someone’s going to the beach. There should be a free bunk. [With a emphasise on FREE here]
We sleep. We get up. We shower. We drink – Admirals Rum. Ever heard of it? It’s the equivalent of Satan’s piss with a dash of witblitz to sweeten the deal. We drank it with Coke. We find the venue. We look refreshed. We watch the bands (Mr Cat/Thieve/Pierre Greef (special guest???)/Mizers/Tidal Waves/Zinkplaat [HAPPY NEW YEAR]/Straatligkinders… it’s pretty much a blank after that…) and at 2:00am the buses leave, taking the bands, the Seerowers and the parrrdy with them. So we mission back to the backpackers where things were just getting warmed up. I pass out. 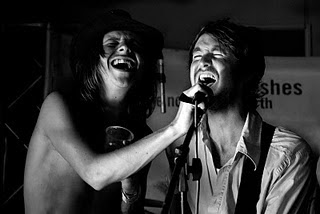 Die Tuin Dwergies lead and Thieve’s (Al)Freddo.
Next afternoon it’s hot as hell and we realise after packing and saying our goodbyes, that our car battery in flat. Now you must understand that at this point in time Inggs and I had lost our marbles. We were talking in grunts and shrugs because we were unable to construct a proper sentence. So we go in search of jumper cables. Oh no wait, it’s a fucking public holiday. Which means FUCKALLISOPEEEEN. So it’s back to the backpackers to contemplate our future – quite possibly at the backpackers where we have to now become employees or squatters. Until some “real men” from Pretoria decide to pop open the bonnet, remove our car battery, put it in their car and thus fully recharge our pap one. Real men live in Pretoria.
Goodbye Etienne. One day I shall return to make you my husband.
HERMANUS
This one was bittersweet. We all knew it had to end sooner instead of later, but none of us really wanted to face the prospect of returning to work/studies/bumming. Inggs and I finally got a chance to see Baarmoeder Gevoel after being late for every gig we’d been to. We like them. They’re fun. And pretty. 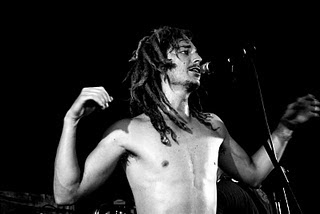 Baarmoeder Gevoel’s lead Dawid.
Too be really honest, I wasn’t really paying any attention to what was going on onstage at this gig. I was basically running around like a chicken without a head, but with a pen in my hand. I had this novel idea at the time that I would get everyone to sign my arms. It started out smooth. It then became a free-for-all and I knew once I’d ended up with F.B.I (Full Blooded Indian) on my upper arm that perhaps this wasn’t the best idea I’d ever had. It ended with Ryno’s “Aiiii my lam” being written across my back. Zinkplaat’s Beitel had the rest of the lyrics scrawled across his arm. Inggs had some on her stomach. I know there is a photo of the three of us somewhere. I do remember it being taken. I hope it never surfaces. 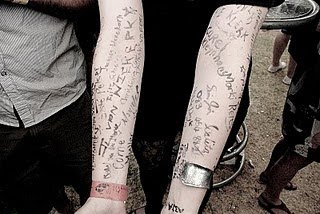 The PG version.
There’s also footage of us all dancing onstage while Tidal Waves jigged to ‘Lekker Lekker Dans’. I hope it never surfaces. I’ve never been too good with all that goodbye nonsense so I won’t get too sentimental about the last night at the campsite. I did leave with an extra hoodie and a bottle of brandy though so I guess I did score. In more ways than one.
Highlight: Werner, Carel, SinJin, Tjoppie, Corne, Driaan, Adrian, Ruan, Anneri, Manielle, Jacques, Clinton, JL, Theo, Jono, Alette, Porra, Beitel, Bertie, Carla, Beer, Ally, Bouwer, Basson, Mark, Paul, Geran, Dawid, Dawee, everybody else on the buses but ESPECIALLY the chick that asked, “Can I plug my hair-straightener into the generator??”
Gees.
0
SHARES
ShareTweet