This has been a fokken weird week. Honestly. In fact if I think about it, ever since I got back from Avontoer I’ve been on some kind of strange introspective quest. Must be old age. Ah no… it can’t be that. It could be a complete lack of intellectual stimulation which has made me turn to Jack (and Russian Vodka, Irish Whiskey, German Beer, African papsak [thank you for that Half Price] and some Tall Horse – don’t ask) far more often than I do. I’ve also been listening to Half Price’s album ‘The Monotony of Monogamy’ the entire day. It’s done nothing to improve my current situation. It just made me open a bottle of wyn.
Now if I’ve said it once, I’ve said it 100000 times – I’m all about the lyrics. Half Price don’t really seem to think really hard about what’s going on in-between the lines, more like the sheets… but I digress. I’ve met one or two of these dudes socially a bunch of times without even knowing who they were and they’ve usually been vulgar, drunk and in my face – or Pope’s. Does this bother me? Hell no. I was probably just as intoxicated as they were at the time.
My point – before I wrote this article about them for the upcoming LMG issue, I’d seen them perform once. And I remember the only reason I went to that gig at Mercury all those years ago was because I thought their ex-guitarist Rene was a sexbomb. Drink. Score. Move on. “When you score someone, it’s like you’re giving them a very, very firm handshake and you’re saying ‘Hi there. It’s nice to meet you.’” – A woman with a love for guns. 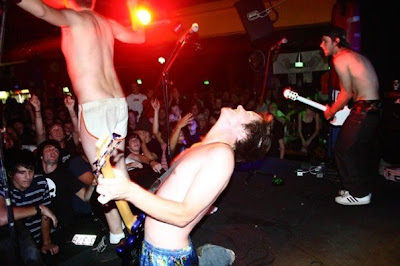 I stole this off Facebook. Hos jaaa.
But now. Now I’m looking at these dudes in a completely different light. They’re quite smart. And it all lies in the simplistic formula that these guys have come up with recently in terms of making music and their D.I.Y policy when it comes to publicity and the like. I like. A lot. Shit albums do not rotate on my iTunes. Ever.
Let’s observe some lyrics, shall we?
Sometimes I feel like the records stuck/It’s another 5 day week, I’m down on my luck/Cos I’m a lonely/A bottle in my hand/You will never ever fuckin’ understand/It’s an addiction with a love hate twist/I hate to be sober but I love to be pissed/I’m not sure what I like more/The hangover, or the night before.
Simple. Effective. And oh so goddam true. I wish I could go on, but it’s 3 in the morning and I’m slightly drunk so I think it might leave it right there. Fukkit. I just saw the disgustingly blatant parallels in this post. Hmmm.
PICK UP A GODDAM COPY OF THIS ALBUM. It comes with a mini-mag and a condom, just encase this album makes you horny and you have big plans later. R180. Borrow it from your mother.
0
SHARES
ShareTweet