Right. So I promised you ‘n beitjie Avontoer roundup. Here’s the first installment.
STILBAAI Groot Gees Rock Fees.
We leave Stanford – we look great, we smell great. We’re aware of our surroundings and we’re 100% sober. Fast forward 12 hours later. We disappear (at 5 in the morning while everyone’s still dreaming) back to Stanford – we look like shit, we smell like a pondok. We’re disorientated from sleeping in the instrument tent and we’ve basically got alcohol poisoning.
How did this happen? I’ll tell you how…
After Inggs and I basically stole her brother’s car “He’s back packing in South America, he’ll never notice” we stocked up on the essentials – biltong and wyn – and made a mish to Stilbaai, where Bundi Productions constructed a stage in the middle of a fokken field. Epic. More epic than that was arriving as Ryno Velvet (Aiiiii my lam) started playing and then finding an entire bottle of Havana Club in the car, which obviously, we klapped in under an hour while screaming “Kyk hoe lyk jy nou”. Indeed. Ryno Velvet – so wise.
I’m not sure how many people were there but I’m estimating it was a shit load. Ryno Velvet off, City Bowl Mizers on. Now let me take a second to explain my love for this band. As well as my “cherry pie” reference. Inggs is not a fan. We basically tear each other to pieces when one of their songs come on in the car. So firstly they’re from Durban. Think Balito Bay on a kind of ashen sand surf ‘n turf bronzed body Kerouac crack. Cut off skinny jeans, speedos and vanilla ice-cream. It’s the kinda choons you play when you’re throwing a pool party and don’t really want to take yourself too seriaaasly. I lost myself in this music and jigged like a hippie at Woodstock, except with a lei around my neck. Children of the pastiche generation. 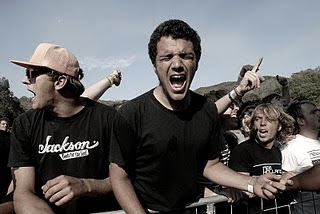 This man downed an entire bottle of Jager.
There was a classic moment when lead singer Martin decided to change the lyrics if ‘Uh-huh’ and croon: “Standing by the window. Putting out my – joint” with a hectic emphasis on joint here. Everyone noticed. Everyone pissed themselves laughing. Cherry pie on some good hash. They’re fantastic.
Then Peach ‘Sex-On-Legs’ Van Pletzen walked past me and my life was complete – or at least I thought it was until Van Coke Kartel took to the stage, threw out free bottles of Jagermeister and I lost Inggs to her camera. Their performance was stellar. Pity about the raging South Easter that followed us from Cape Town which resulted in me having half of the Stilbaai bos in my hair. Then later it rained and the combination of bos and the dampness solidified my hair into a helmet. Sexay. Is Jedd Kessow in Van Coke Kartel, or is he not? We shall wait and see… 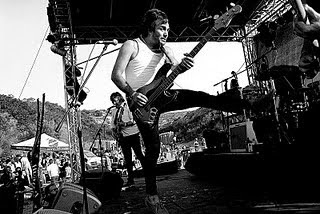 Wynand going bos.
After Van Coke, Inggs considers her work done for a bit and we go parrrdy with the boys from Baarmoedergevoel and get introduced to the sweet, sweet nectar of Robertson Wineries. Robertson.I.Love.You. Then Hunters Dry slush puppy. Then Brannaaaaa and god knows what else. I was greeting people I didn’t know (or perhaps I did) like they were long lost relatives. With ef-el, Straatligkinders (LIEFDE WEN) and Tidal Waves to sing us into a sort of veld slumber.  We also attempted to smuggle wine out of the bar area, but Porra’s army of Congolese soldiers were way too quick. More on the F.B.I later.
Zinkplaat on. Basson and Beityl work those frets like thier lives depend upon it and Bertie has the parrrdy vannie jaaar standing in the middle of the stage. Beer holds it together. The crowd goes mental for Hondeklipbaai, Zinkplaat’s number 1 fan Neels van Jaarsveld and the hottie from New Holland, making cameo appearance. On what song? Do you really think I remember? 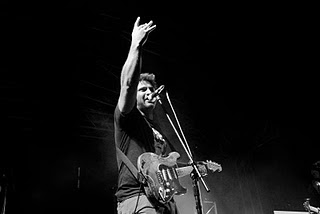 I’ve always liked Zinkplaat but now I have a newfound appreciation for them.
And then? Heuwels come on and I make Seerower friends with our rollies that people think are joints. Jack Parow comes on and Inggs goes into a alcohol-induced spasm because I don’t think she’s ever taken such good photos. Heuwels come off. And it starts to rain. And Bundi start to dismantle the stage. This was round about the time when people realised that Fokof and aKING weren’t actually going to play, (say what???) that the shit hit the fan and people started throwing things and going ape. The rain wasn’t the problem. I’ll stand in the rain for as long as it takes if it means I get to see my favourite band. The problem was the curfew. I’ll say that again – The problem was the CURFEW. They fokken ran overtime. And no one told those poor souls screaming “eeeeeek skyn” at the top of their lungs that it was the end of the road. 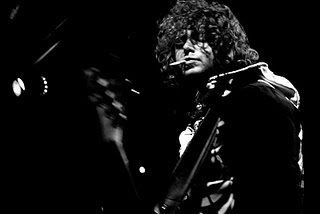 Hunter. Say no more.
So the pardy ends there right? Wrong. We still have a bottle of rooiwyn and coke. Katemba time, which obviously, we klapped in under an hour. I see my Wild West boys (Dennis, Lo, Ian) in a purple haze. I disappear. Then Inggs disappears for a lekker lekker dans somewhere and I make friends. With Ally (City Bowl Mizer bassist) and his bottle of Jager. Ally made lots of friends that night. And then I make another friend, a lifelong friend actually – Hugo. Whose name, I was to learn, is actually pronounced Heeegooo. Ek’s jammer. Ek’s Engleesh. Ek verstaan niks. A few days later he reminded me of this fact. I also thought I was sitting around a campfire drinking and listening to Jacques from Mr Cat and the Jackal make carnivalesque music with a bow and a saw. Indeed I was. But there was no fire. I imagined that.
I then grope in the darkness to find Inggs, I make friends in the instrument tent with a bass, in a manner of speaking and I – blackout.
That was Stilbaai. In a word. Epic. 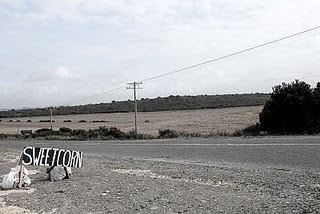