It’s another VCK day today. Yes it is. Also, I couldn’t be bothered to talk about anything else at the moment. Wrote a little CD review (nowhere near as extensive as this one) for LMG but I sent in late blah blah blah and Mikey had already made other plans. It’s cool. That’s how we roll. I did however promise @Ninja_Jellybean that I would post mine here. So here’s my take on ‘Skop, Skiet en Donner’ in 216 words. Perfect for those of you with retarded attention spans like mine…
Let’s cut to the chase, shall we? The diehard Van Coke fan is going to have insanely mixed feelings about this album, whereas the more avant-garde follower will gladly embrace its pioneering eclecticism.
On the second track ‘Ondier Kom’ we’re given the first real taste of the Van Pletzenised Kartel, with its blatant electro intro balanced by a few jarring guitar riffs and some well-placed vocal delay. This is followed by the more melodic, electric guitar driven ‘Huissiek Gebere’ where the unmistakable reverberation of Laudo’s vocals can be heard all-through. Gerald Clark also makes an appearance on the slight bluesy acoustic remake of ‘Algehele Kontrole’ off their debut album
Van Coke also indulges in a spectrum of covers, namely J.J. Cale’s ‘Cocaine’ the gorgeous and haunting ‘Skadu’s Teen Die Muur’ and the cheesetastic 80s tune ‘Maniac’. Besides the guitar solo that provides Nathan (album) or Jedd (live) with the perfect opportunity to showcase their sickeningly fabulous guitar skills, there really is no other reason for this track to even be on the album, other than for comic relief.
So if you’re looking for another ‘Waakssam & Wakker’ you’ve come to the wrong place. However I urge you to raise a bottle to the innovative genre boundaries pushed by Francois and Wynand, moreso then any other rock band have done in a while.
Now that that’s done and dusted, this gig should be good: 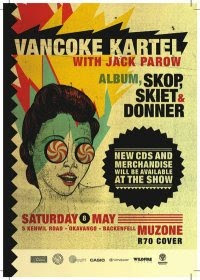 Ashtray and Heldervue at Aandklas in Sbos tonight if anyone’s out that way. R30 gets you in.
Also, does the title of this post remind you of anything? A song maybe?
Lekker dag.
0
SHARES
ShareTweet