I slaved like Britney Spears for the last two days to finish my English essay by the due date aka TODAY. And after getting up before the crack of dawn today to do my introduction/conclusion, I get a sneaky email telling me that the due for submission has been extended. TO WEDNESDAY. I guess it’s better this way though, otherwise I would’ve left the entire thing for Tuesday night. As you can guess, I’m not the happiest of chappies today.
So this past weekend was interesting. I aimed to be sober sonder heels on Friday at Mercury for Wrestlerish/Ashtray/Lottery Tickets. What a waste of my precious time. Busy with that gig review while you read this. Probably going to make even more friends than the last time I wrote about one out of three of said bands. At least I got to see my girls (Z, Liz and Andrea) Friday, so I guess all wasn’t really lost. I also got uber gesuip as per usual after everything was said and done. But this time, I have no idea how. Min alcohol consumption. Seriaaas. Apparently I was walking around The Shack in circles. Great. My apologies Sean and whoever else I harassed. Rabi I love you. Wake up. Go home. Move along.
Saturday was Van Coke Kartel’s album launch/Toffie culture fest parrrdy at some dodgy hall in Hope Street. It was the highlight of my weekend for a number of reasons. Firstly, Inggs made a mish through from Stellies and it was good to see her – page boy hair-cut and all. Then I got to meet her not-really-American cousin Adrian (or Adriaan – his boere alter-ego which he will henceforth be known as). I was also greeted by a man dressed as a giant condom and the friendly face of @musicalmover which was all preceded by the motor-boating of my boobs. Thereafter I sipped on a Tequila and coke – which the experienced bartender psuedo-confidently argued was in actual fact a brandy and coke. Really? Are you really going to argue with me?? That’s what I thought.
So we arrive and Frannie’s in a bear suit, which looked more like a monkey suit to me. God knows why. Without the head it really did look like a monkey, I swear. Anyway… Peach is doing his thing on the drums and Frannie is flapping his arms around like some kind of substandard dancing version of Gazelle, while the most random images you can imagine were flashing on the several screens placed all around the stage. Sound like fun? It was fucking awesome. And Frannie was the shit in that suit. This is Oorlog Frankenstein people. Wich heavy emphasis on Frankenstein side of things. Aguilera didn’t look very impressed. 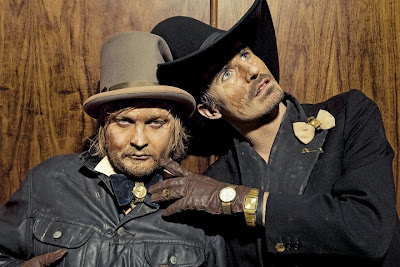 I looked for one of Frannie in the bearsuit. I couldn’t find one. So I stole this from Sean Meterlerkamp instead. Jammer.
So like, do you remember when VCK  went to Argentina? Yeah me neither, but apparently they made some friends there. Namely an electro-rock group called Manta Raya. Despite the inaudible, but shit hot, female lead singer who Adriaan kept saying he’d like to lick, they weren’t really much to write home about. A 21st century prom band. You can quote me on that. They go off. VCK come on. With some new drummer dude named Jason and Jedd I’m-so-disgustingly-talented Kossew on guitar aka Frannie’s favourite Jew. I almost pissed myself when he said that onstage. I think Wynand also made some kind of Jew crack. That’s like saying – actually no – I’m not even going to go there today. Wynand looked like some kind of demented character out of ‘Oliver Twist’ in his top-hat and coat and good old Frannawyn was his usual fantastic self.
They kicked off with the second track off the new Van Pletzenised album ‘Ondier Kom’. This was followed by more new tracks. And then some old tracks. Inggs and I almost cried when they played ‘Wat Het Van Ons Geword?’ complete with cello accompaniment. And then Aguilera was ambling around like he’d cracked some ribs after he was rammed into the side of the stage by some crazed moshpit freak. Great. All of this going on while random Jungle Book/Lion King images flashed continuously during their set and people dressed like zombies skulked around hiding cigarettes from the security dudes. Fantastic.
All in all, a great night. I headed home at about 1 (to be up early to work on that FUCKING essay) while everyone went to The Shack and I awoke to several dozen messages about what a fantastic parrrdy I missed. It always works that way, doesn’t it?
Side note: if you want to win some VCK stuff click here, answer WAAR of VALS to some questions and Wynand and Frannie will come to your house. Not really, but they’ll totally give you a prize. ‘Cause they’re nice like that. Judging by this post, I’m obviously not.
And to answer your burning question –  YES. We shall be hearing a lot more of that ‘Maniac’ track now that there’s a music video on the way. Shoot.Me.Now. 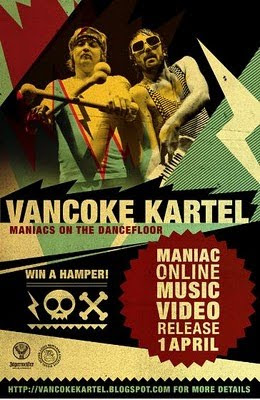